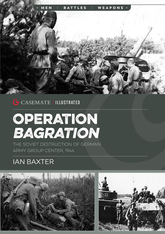 Bagration was the code word that the Soviet Army gave for their summer offensive in 1944. This massive offensive led to the destruction of the German Army Group Center and was the greatest military defeat ever experienced by the German Army during World War II.

This book provides an absorbing insight into the German defeat and the Russian offensive using a variety of rare and previously unpublished photographs. With detailed captions and text together with 20 artist profiles and maps, the book shows the compelling story of how German Army Group Center tried to counter the overwhelming might of the Soviet Army as it poured thousands of men, weapons, and armor across the German lines. What ensued was a swift and bloody battle of attrition.