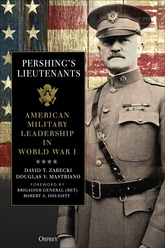 A legacy of leadership

World War I had a profound impact on the United States, which was forced to “grow” an army almost overnight. By the end of the war, the US Army had grown to 3,700,000 soldiers. Until the US did so, no country ever tried to deploy a 2-million-man force 3,000 miles from its own borders, a force led by American Expeditionary Forces Commander-in-Chief General John J. Pershing. This was America's first truly modern war and rising from its ranks was a new generation of leaders who would control the fate of the US armed forces for decades to come.

This fascinating book reveals the history of the key leaders working for and with John J. Pershing during this tumultuous period, including George S. Patton, Douglas MacArthur, and Harry S. Truman.