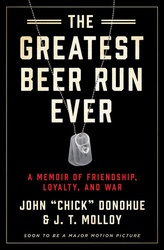 The Greatest Beer Run Ever: A Memoir Of Friendship, Loyalty, And War

Brewing up a perfect plan

One night in 1967, twenty-six-year-old John Donohue—known as Chick—was out with friends, drinking in a New York City bar. One neighborhood patriot came up with an inspired idea. Someone should sneak into Vietnam, track down their buddies there, give them messages of support from back home, and share a few laughs over cans of beer.

Chick, a Marine Corps veteran turned merchant mariner, was up for the challenge. A day later, he set off on an adventure that took him through a series of hilarious escapades and harrowing close calls. But none of that mattered if he could show his pals how much the folks back home appreciated them.

This is the story of that epic beer run, told in Chick’s own words and those of the men he visited in Vietnam.