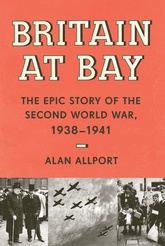 A nation transformed by war

In looking closely at the military and political dimensions of the Second World War's first crucial years, historian Alan Allport tackles questions such as: Could the war have been avoided? Could it have been lost? What difference did the war make in the end to the fate of the nation?

In answering these and other essential questions, Allport focuses on the human contingencies of the war and the outcomes determined by luck or chance. Moreover, he looks at the changes in wartime British society and culture. Britain at Bay draws on a large cast of characters in a comprehensible and compelling single history of forty-six million people. For better or worse, much of Britain today is ultimately the product of the experiences of 1938-1941.

“Britain at Bay is a welcome and highly readable retelling of the story of Britain’s entry into the Second World War and its initial survival against great odds. Weaving together grand strategy, high politics and the complexities of British society at the time, Alan Allport deftly demolishes some sacred cows along the way and makes the reader think again about the choices and the odds facing Britain.” —Margaret MacMillan, author of Paris 1919