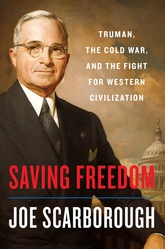 Saving Freedom: Truman, The Cold War, And The Fight For The Future Of Europe

History called on Harry Truman to unite the Western world against Soviet communism, but first he had to rally Republicans and Democrats behind America’s most dramatic foreign policy shift since George Washington delivered his farewell address. How did one of America’s least prepared presidents become one of its most successful?

In Saving Freedom, Joe Scarborough recounts the historic forces that moved Truman toward his country’s long twilight struggle against Soviet communism, and how he acted decisively to build a lasting coalition that would influence America’s foreign policy for generations to come. This is an inspiring tale of American leadership, fierce determination, and courage in the face of the rising Soviet threat.