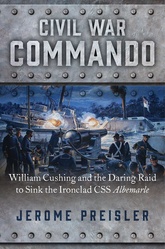 A brave man on a bold mission

Civil War Commando is the incredible tale of two giants on a historic collision course: Will Cushing, the United States Navy's first naval commando, and the unsinkable Confederate ironclad Albemarle.

Cushing has been cited by historians as the inspiration for Star Wars' Luke Skywalker character, and his attack on the Albemarle called the "greatest feat of arms in American military history." Yet the full story of the man has never been told--until now.