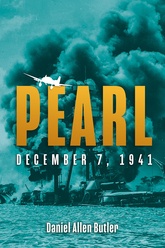 What really happened at Pearl Harbor?

The Japanese attack on Pearl Harbor is one of those rare moments where, in the space of a few hours, the course of history was utterly changed. But how—and why—did the Empire of Japan and the United States of America brutally collide that Sunday morning?

Pearl: December 7, 1941 offers more than superficial answers, showing how both sides blundered their way through arrogance, racism, and human error to arrive at the moment when the Japanese were convinced that there was no alternative to war. Once the battle is joined, Pearl then takes the reader into the heart of the attack, where the fighting men of both nations showed that neither side had a monopoly on heroism, cowardice, or luck, as they fought to protect their nations.