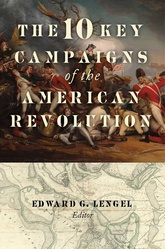 The 10 Key Campaigns Of The American Revolution

Many Americans know bits and pieces of the War for Independence—Lexington, Bunker Hill, Yorktown, Washington, Hamilton, Benedict Arnold. All familiar names, but how did it all fit together? How did merchants, lawyers, farmers and cobblers all come together and defeat the combined forces of the British Empire, its powerful Navy, and their Hessian auxiliaries? For that matter, who were the Hessians, and what is an auxiliary?

Eminent historian, Ed Lengel has brought together ten highly respected Revolutionary War experts to present the stirring narratives of history-making military campaigns that formed a new nation. After reading these ten riveting essays, every American will have a new understanding of our nation's fight for freedom.