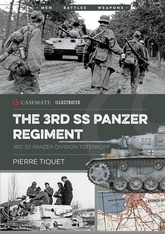 The 3rd SS Panzer Regiment was part of the Totenkopf Division--one of the 38 Waffen-SS divisions active during WWII. Notorious for its viciousness, most notably a mass execution of British prisoners in the battle of France, “Totenkopf” had a fearsome reputation.

The 3rd SS Panzer Regiment was formed in France in late 1942, and transferred to the Eastern Front in early 1943, where it fought for the rest of the war. The regiment participated in a number of critical battles, and would be reduced and rebuilt multiple times.

This Casemate Illustrated edition tells the story of the regiment through the words of the veterans themselves. Plus, it’s illustrated with a wealth of contemporary photographs, original documents, and artifacts.