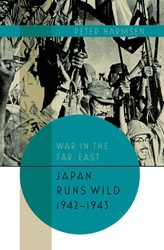 An epic reversal of fortune

In early 1942, the Imperial Japanese Army and Navy were advancing on all fronts, humiliating Allied forces throughout the Pacific. But by the end of 1943, the tables had turned. The American-led military machine had kicked into gear, and the Japanese were fighting a defensive battle.

The second installment of Peter Harmsen’s three-part history, Japan Runs Wild, 1942–1943 details the astonishing transformation that took place in that period. Giving due emphasis to the Japanese-American struggle, Harmsen also sheds light on the other peoples involved, including the British, Australians, Soviets, and Koreans. Above all, the importance of China is highlighted in a way that no previous general history of the war against Japan has achieved.