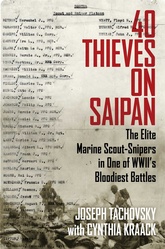 40 Thieves On Saipan: The Elite Marine Scout-Snipers In One Of WWII's Bloodiest Battles

Honor among the 40 Thieves

Before there were Navy SEALs, before there were Green Berets, there were the 40 Thieves. This elite Scout Sniper Platoon of the Sixth Marine Regiment killed their enemies in silence during World War II.

Joseph Tachovsky--whose father Frank was the commanding officer of the 40 Thieves, also called "Tachovsky's Terrors"—joins with award-winning author Cynthia Kraack to transport readers back to the brutal Battle of Saipan, the "D-Day" of the Pacific. Built on hours of personal interviews with WWII veterans, their personal papers, letters and documentation from the National Archives, 40 Thieves on Saipan is an astonishing portrayal of brutal World War II combat. It's also a rare glimpse into the lives of World War II Marines.