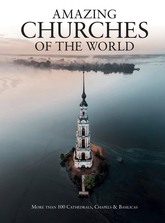 Amazing Churches Of The World

Step into the world’s most beautiful churches

From early basilicas to magnificent medieval cathedrals, from simple churches in rural Africa to 21st-century award-winning designs, this stunning volume reveals the different approaches to faith across the centuries, shifting architectural styles, and the effect of history on Christianity—and how Christianity impacted history in return. Encompassing Catholic, Protestant, Orthodox, Baptist, Calvinist beliefs, and more, these churches include stone and wooden structures; ones that have been knocked down and rebuilt; buildings cut into rock and earth; and some constructed in some of the least hospitable locations on Earth.

Features over 200 color photographs that perfectly capture the awe-inspiring splendor of these sacred structures.