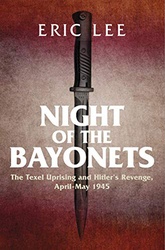 Night of the Bayonets: The Texel Uprising and Hitler's Revenge, April–May 1945

A time for vengeance

In the final days of WWII in Europe, Georgians serving in the Wehrmacht on Texel Island off the Dutch coast rose up and slaughtered their German masters.

The loyalty of the Georgians was always in doubt, as Hitler himself suspected, and once deployed to the Netherlands, the Georgian soldiers made contact with the local Communist resistance. When the opportunity arose, the Georgians massacred some 400 German officers using knives and bayonets. An enraged Hitler ordered the Germans to fight back, showing no mercy to either the Georgians or the Dutch civilians who hid them.

Author Eric Lee explores this fascinating but little known last battle of the Second World War: its origins, the incredible details of the battle, and its ongoing legacy.