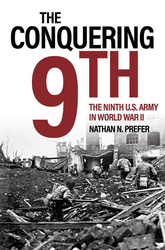 The heroic journey of the Ninth

The Ninth Army came into existence in May 1944, under the command of General William Hood Simpson. It landed at Utah Beach, France, in late-August and entered the fray in Brittany, taking over from the Third Army. The biggest port in Brittany was Brest and the Ninth Army captured it in September.

The Ninth then moved to the Siegfried Line and was the only American army to fight under British Field Marshal Montgomery’s command. It made it all the way to the Elbe before the war ended.

This new history of the Ninth places the contribution of the unsung army into a full history of the war in Europe from 1944-45. It covers all levels of the army’s activities, from the higher echelon to the combat units under its command.