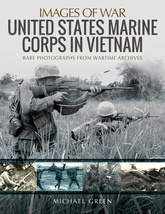 Witness the USMC in action

With the South Vietnamese government verging on collapse in early 1965, American President Lyndon Johnson decided to commit American ground forces in the form of a United States Marine Corps brigade of approximately 3,000 men. So began a massive and costly 10-year commitment. In the end, the fighting during such well-known battles at Con Tien, Chu Lai, Hue, Khe Sanh, Dong Ha, and many more would cost the USMC 13,070 killed in action and 88,630 wounded.

In this gripping book, well-known military historian Michael Green uses hundreds of dramatic images to tell the gallant story of the Marines' contribution to an unwinnable war; the battles, their equipment, from rifles to helicopters and jets, and the strategy adopted by the Corps.