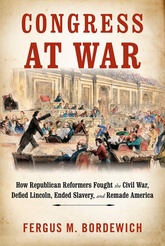 The power of Congress during the Civil War

This brilliantly argued new perspective on the Civil War overturns the popular conception that Abraham Lincoln single-handedly led the Union to victory and gives us a vivid account of the essential role Congress played in winning the war.

From reinventing the nation's financial system to pushing President Lincoln to emancipate the slaves to the planning for Reconstruction, Congress undertook drastic measures to defeat the Confederacy, in the process laying the foundation for a strong central government that came fully into being in the twentieth century. Brimming with drama and outsized characters, Congress at War is one of the most original books about the Civil War to appear in years and will change the way we understand the conflict.