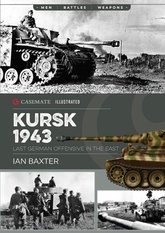 In the summer of 1943, the German-launched Operation Zitadelle (Citadel), aimed at cutting off a large number of Soviet forces in the Kursk salient. This offensive resulted in the battle of Kursk, the largest tank battle of World War II.

Kursk quickly became a fierce contest of attrition, as Wehrmacht and elite Waffen-SS Panzer-Divisions unsuccessfully tried to hammer their way through strong Soviet defensive positions. What followed was unabated fighting for two weeks as German units were systematically ground down in a series of brutal armored battles.