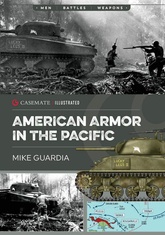 American Armor In The Pacific

This latest in the Casemate Illustrated series explores American armor during the Pacific Campaign of WWII, from 1942-45. During this period there were over twenty major tank battles and operations where tanks provided heavy support to infantry units. These operations include the battle of Tarawa and the Bougainville Campaign. Relying heavily on first-person accounts, the strategies and tactics of the opposing forces are brilliantly discussed.

Detailed and vivid, this book also looks at the Pacific theater, and how American armor was employed with great success. Readers will discover in-depth information on American and Japanese armored forces, including development, equipment, capabilities, organization, and order of battle.