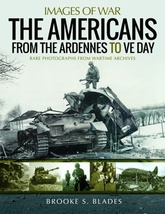 Images Of War: The Americans From Ardennnes To VE Day: Rare Photographs From Wartime Archives

Capturing the end of WWII in Europe

The third and final volume of the Americans in North-West Europe series covers the historic period December 1944 to May 1945.

Launched in December 1944, the Nazis’ Ardennes offensive, known as the Battle of the Bulge, was one of the most dangerous periods of the War. The Rhine was crossed in March 1945, first by the seizure of the railway bridge at Remagen and then by a combined American, British and Canadian ground and airborne operation. Finally, Berlin fell to the Russians in early May. In the chaos that followed, Germany was divided into four zones of occupation.

In true Images of War style, this book graphically represents the magnificent role played by US forces during all these events under General Eisenhower’s command.