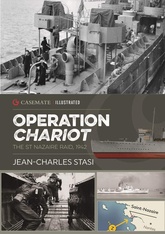 An explosive mission for the Allies

At the beginning of 1942, the Tirpitz, the heaviest battleship ever built by a European navy was on the cusp of breaking out into the north Atlantic. The prospect of the giant German battleship patrolling the Atlantic posed a huge threat to the convoys that were the lifeline for an embattled Britain. Determined efforts were made to damage the ship through bombing raids: these failed. An altogether more radical plan was conceived: destroy the dry-dock facility at St. Nazaire on the French Atlantic coast and the threat would be neutralized.

This expertly illustrated volume gives a clear overview of the planning and execution of the raid and its aftermath, accompanied by 125 photographs and images, including color profiles and maps.