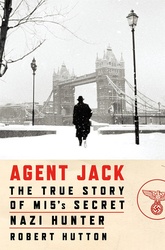 June 1940: Europe has fallen to Hitler’s army and Britain is his next target. Churchill exhorts the country to resist the Nazis, and the nation seems to rally behind him. But in secret, some citizens are plotting to hasten an invasion.

Agent Jack tells the incredible true story of Eric Roberts, a seemingly inconsequential bank clerk who, in the guise of “Jack King,” helped uncover fascism on British shores. Gifted with the ability to make people trust him, Roberts penetrated the Communist Party and the British Union of Fascists before playing his greatest role for MI5: Hitler's man in London.

In this real-world thriller, Robert Hutton tells a fascinating story that has only recently come to light with the opening of MI5’s WWII files.