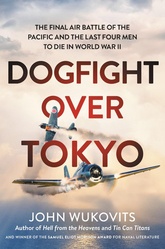 Dogfight Over Tokyo: The Final Air Battle Of The Pacific And The Last Four Men To Die In World War II

Caught in the moments between war and peace

When Billy Hobbs and his fellow Hellcat aviators from Air Group 88 lifted off from the venerable Navy carrier USS Yorktown early on the morning of August 15, 1945, they had no idea they were about to carry out the final air mission of World War II. Two hours later, Yorktown received word that the war had ended and that all offensive operations should cease. As they were turning back, twenty Japanese planes suddenly dove from the sky above them and began a ferocious attack. Four American pilots never returned.