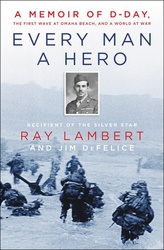 Every Man A Hero: A Memoir of D-Day, The First Wave at Omaha Beach, And A World At War

by Ray Lambert and Jim DeFelice

Seventy-five years ago, he hit Omaha Beach with the first wave. Now Ray Lambert, ninety-eight years old, delivers one of the most remarkable memoirs of our time, a tour-de-force of remembrance evoking his role as a decorated World War II medic.

After saving dozens of lives and being wounded at least three separate times, Ray would lose consciousness in the shallow water of Normandy. He would wake on the deck of a landing ship to find his battered brother clinging to life next to him.

This is the unforgettable story of what happened during those desperate hours on Omaha Beach and of the bravery that preceded them, from the vast sands and green hills of Africa, through the treacherous mountain passes of Sicily, and beyond.