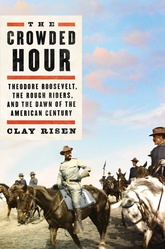 The Crowded Hour: Theodore Roosevelt, The Rough Riders, And The Dawn Of The American Century

Saddle up with the Rough Riders

When America declared war on Spain in 1898, the US Army had just 26,000 men, spread around the country. In desperation, the Rough Riders were born. A unique group of volunteers, ranging from Ivy League athletes to Arizona cowboys and led by Theodore Roosevelt, they helped secure victory in Cuba in a series of gripping, bloody fights.

Both a portrait of these men and of the Spanish-American War itself, The Crowded Hour dives deep into the daily lives and struggles of Roosevelt and his regiment. Using diaries, letters, and memoirs, this narrative illuminates a disproportionately influential moment in American history: a war of only six months’ time that dramatically altered the United States’ standing in the world.

“Scrupulously researched and dramatically narrated, The Crowded Hour showcases Theodore Roosevelt in all of his Rough Rider glory. Clay Risen, a marvelous historian, brings the Spanish American War and the Gilded Age back to life in these vibrant pages. All of TR’s undaunted hubris, bedrock patriotism, derring-do, and political genius are captured in this fast-paced war epic.”—Douglas Brinkley, Katherine Tsanoff Brown Chair in Humanities and Professor of History at Rice University and author of The Wilderness Warrior: Theodore Roosevelt and the Crusade for America

“Here, in cinematic fashion, Clay Risen captures the nearly inexhaustible energy and irrepressible charisma of Teddy Roosevelt at the moment of his meteoric rise into the national consciousness. Through careful sifting and resourceful reporting that runs both broad and deep, The Crowded Hour brings fresh insight and a modern sensibility to this classic episode of American history.”—Hampton Sides, author of Blood and Thunder and On Desperate Ground

“Crowded Hour is a marvelous book. There is no finer account of the fighting in the Spanish-American War, and the author’s clear-eyed examination of the war’s most celebrated hero, Theodore Roosevelt, is as powerful as it is original.”—Patricia O’Toole, author of When Trumpets Call: Theodore Roosevelt after the White House

"Clay Risen has given us an illuminating and elegant account of how Theodore Roosevelt and his Rough Riders in many ways founded what would become, in Henry Luce's phrase, the American Century. Restless and brave, flawed and noble, TR and his compatriots embodied an emerging global nation—for better and for worse. It was indeed a crowded hour, not only for Roosevelt but for America."—Jon Meacham, author of The Soul of America