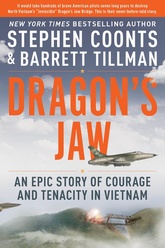 Dragon's Jaw: An Epic Story Of Courage And Tenacity In Vietnam

Slaying the Dragon of North Vietnam

For seven long years, hundreds of young US airmen flew sortie after sortie against a strategically important bridge in North Vietnam called Dragon’s Jaw. Many American airmen were shot down, killed, or captured and taken to the infamous "Hanoi Hilton" POW camp. But after each air attack, the bridge stubbornly remained standing. For the North Vietnamese it became a symbol of their invincibility; for US war planners an obsession; for US airmen a testament to American mettle and valor.