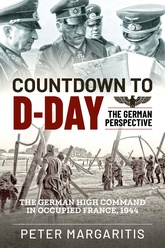 Countdown To D-Day: The German Perspective

In late-1943, among rising realization that the Allies are planning to invade, Field Marshal Rommel was assigned the title of General Inspector for the Atlantic Wall. He soon discovered that the famed Atlantic Wall is woefully unprepared for the forces being massed across the English Channel.

Alongside Rommel are a set of elite commanders, each driven by their own ambitions, ideas and armies. All of the commanders are subject to the whims of Hitler, hundreds of miles away but continually issuing orders increasingly divorced from the reality of the war.

Countdown to D-Day takes a journal approach, tracing the daily activities and machinations of the German High Command as they try to prepare for the Allied invasion.