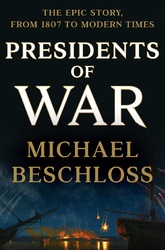 Presidents Of War: The Epic Story, From 1807 To Modern Times

It is the most difficult decision a president can make: the choice to send American servicemen into harm’s way. Historian Michael Beschloss offers an authoritative portrait of our major wartime commanders-in-chief, from the War of 1812 to the present day.

Whether examining Lincoln’s controversial leadership, Wilson’s idealistic approach to World War I, or LBJ sinking into the quagmire of Vietnam, Beschloss vividly depicts how our leaders withstand the pressures of war—or are broken by them. He also charts their relationships with the public, and with Congress, which has continually struggled to define the president’s wartime powers.

Presidents of War is a provocative and illuminating look at leadership and decision-making in times of crisis.