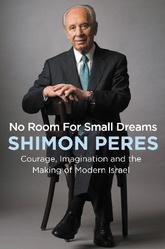 No Room For Small Dreams: The Decisions That Made Israel Great

With a legacy that has carried him from freedom fighter to Israeli Prime Minister to recipient of the Nobel Peace Prize, Shimon Peres is one of the towering figures of the twentieth century. Completed just weeks before his death, here is Peres's majestic and intimate exploration of modern Israel's history and the values that will carry her forward.

No Room for Small Dreams spans decades-from the Arab riots in the wake of World War I to Israeli spy operations to its nuclear program; from its controversial wars and peace treaties to today's extremist settlers.

In looking back, Peres looks forward, offering a meditation on the sacrifices of making peace, and on the courage necessary to emerge from the shadows of history into a bright future.

"Shimon Peres was a giant of Israel's founding generation, a tireless advocate for peace, and an eternal optimist who lived his life with a sense of hope and possibility. He also became a treasured friend to me and source of wisdom for me. All of us have much to learn from his story, which now belongs to the ages."-Barack Obama

"Shimon Peres, one of the great leaders of Israel for more than half a century, was an unusual statesman: a combination of a dreamer and a pragmatist, a thinker and a doer, a fearless campaigner for peace and compromise and a tireless builder of Israel's armed forces. He was also a unique storyteller. This book is a special treat for any reader who is excited by history, by politics, by Israel in the Middle East, by changing realities and by amazing dreams and visions."-Amos Oz

"Shimon Peres started life as Israel's brightest student, became one of its best teachers, and ended up its biggest dreamer. In his final book, completed just weeks before his death, Peres reflects upon his seventy years in politics and the defining moments in Israel's history that laid the foundation for a future of peace and possibility. This book captures my friend's lifelong belief in our potential to rise above our wounds, our resentments, and our fears to make the most of today and claim the promise of tomorrow."-Bill Clinton

"Israel has made a tremendous contribution to global technological innovation, and its moniker of ‘start-up nation' is well earned. But the leadership lessons in this book show why Shimon Peres was, in so many endeavors, able to glimpse opportunity when others predicted failure. If you don't try, you don't know– that's the secret of innovation. Shimon Peres understood that."-Eric Schmidt

Shimon Peres (1923-2016) was one of Israel's founding fathers and for more than six decades was an architect of its ascent from a fragile state to a global power. In 1994, he was awarded the Nobel Peace Prize for his efforts to bring peace to Israel and Palestine, and in 1996 he founded the groundbreaking Peres Center for Peace and Innovation.