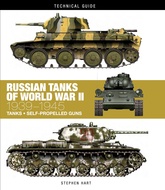 The Red Army's astounding success on the Eastern Front owed a great debt to its armored arsenal. Packed with 120 newly commissioned full-color illustrations, here is a detailed guide to the war's Soviet AFVs-from the T-18 light tank and BT fast tank series to the heavy Joseph Stalin tanks of the conflict's final months.

All of the major and many minor tanks are featured, including variations of the T-26, KV series, and T-34; self-propelled guns; and such Allied Lend-Lease AFVs as the British Churchill and American Sherman and tanks. Each profile includes authentic markings and color schemes, while every separate model is accompanied by exhaustive specifications.

Russian Tanks of World War II is an essential for every military bookshelf.

Stephen Hart is a Senior Lecturer with special responsibilities at the Department of War Studies, the Royal Military Academy Sandhurst. His many books include Military Atlas of Tank Warfare, The Battle of the Hedgerows, Sherman Firefly vs Tiger, and World War II Secret Operations Handbook.