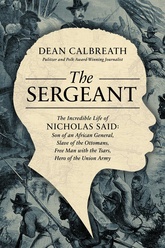 A life of resilience and bravery

In the late 1830s, a young Black man was born into a world of wealth in the powerful African kingdom of Borno. But instead of becoming a respected general like his fearsome father, Nicholas Said’s fate was to fight a very different kind of battle.

At the age of thirteen, Said was kidnapped and sold into slavery, beginning a journey that would take him across Africa, Asia, Europe, and eventually the US, where he would join one of the first African American regiments in the Union Army. Along the way, Said encountered such luminaries as Queen Victoria, fought Civil War battles that would turn the war for the North, established schools to educate newly freed Black children, and served as one of the first Black voting registrars.