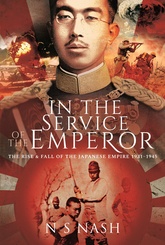 In the Service of the Emperor

An empire at war

The rise and fall of the Japanese Empire between 1931 and 1945 was one of the most extraordinary yet shocking episodes in human history. Extraordinary in that a relatively non-industrialised island nation was prepared to go to war, concurrently, with China, the most populous country, Great Britain with its world-wide empire and the USA, the most powerful country on Earth. Shocking, as those "in the service of the Emperor'' practiced persistent and unrestrained brutality as they conquered and occupied swathes of Southeast Asia.

Throughout this superbly researched work, the author expertly examines the political, economic and strategic effects of the rapid Japanese expansion and explores the cult of deity that surrounded the Emperor.