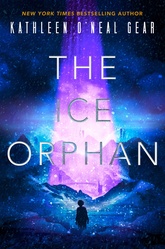 The future is on thin ice

This third book in an acclaimed cli-fi series explores a frozen future where archaic species struggle to survive an endless winter.

It’s been 925 summers since the Jemen unwittingly triggered an Ice Age. All but a handful of Jemen flew to the stars, but before they left, they recreated several extinct species. Now, the archaic hominins that struggle along the edges of massive glaciers are dwindling. Their only hope is a dying quantum computer called Quancee and her student, a man named Lynx. Meanwhile, in the lodges of the Sealion People, a sick boy on the verge of manhood hears voices.

While Lynx battles to save Quancee, the quantum computer has other priorities. Before it dies, it has to save a special boy who cannot save himself.