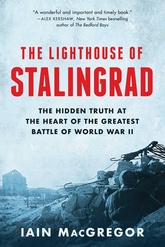 The Lighthouse of Stalingrad

A story of legends and loss

To the Soviet Union, the sacrifices that enabled the country to defeat Nazi Germany in World War II are sacrosanct. The foundation of the Soviets’ hard-won victory was laid during the battle for the city of Stalingrad, resting on the banks of the river Volga. Within this life-and-death struggle, a legend grew of a small garrison of Russian soldiers holding out against the Germans of the Sixth Army, which had battled its way to the very center of Stalingrad. By the end of the war, the legend would gather further momentum and inspire Russians to rebuild their destroyed towns and cities.

The Lighthouse of Stalingrad sheds new light on this iconic battle through the prism of the two units who fought for the very heart of the city itself.