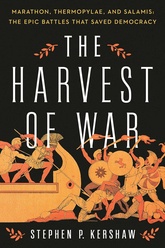 The Harvest of War

The year 2022 marks 2,500 years since Athens, the birthplace of democracy, fought off the mighty Persian Empire. This astonishing clash between East and West still has resonances in modern history—and has left us with tales of heroic resistance in the face of seemingly hopeless odds.

The Harvest of War makes use of recent archaeological and geological discoveries for a thrilling and timely retelling of the story. This captivating history also explores the idea that the decisive battles of Marathon, Thermopylae, and Salamis mark the beginnings of Western civilization itself—and that Greece became the bulwark of the West—representing the values of peace, freedom, and democracy in a region historically ravaged by instability and war.