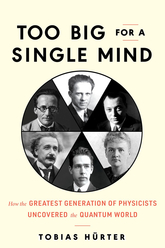 Too Big for a Single Mind

There may never be another era of science like the first half of the twentieth century, when a peerless cast of physicists—Albert Einstein, Marie Curie, Max Planck, Wolfgang Pauli, Niels Bohr, Werner Heisenberg, Erwin Schrödinger, and others—came together to uncover the quantum world. This concept was so outrageous, so contrary to traditional physics, that its own founders rebelled against it until the equations held up and fundamentally changed our understanding of reality.

In this stirring, grand narrative, author Tobias Hürter takes us back to a uniquely momentous time, when war and revolution upended the lives of these renegade scientists, who were forced to crisscross Europe as they worked together to topple classical physics.