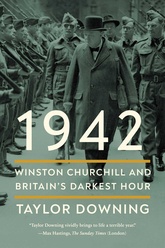 On the edge of defeat

In 1942, a string of military disasters engulfed Britain in rapid succession: the collapse in Malaya; the biggest surrender in British history at Singapore; the passing of three large German warships through the Straits of Dover; the longest ever retreat through Burma to the gates of India; and more. All of this occurred against the backdrop of catastrophic sinkings in the Atlantic and the Arctic convoys. People began to claim that Winston Churchill was not up to the job and his leadership was failing badly.