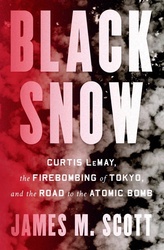 Seven minutes past midnight on March 10, 1945, nearly 300 American B-29s thundered into the skies over Tokyo. Their payloads of incendiaries ignited a firestorm that reached up to 2,800 degrees, liquefying asphalt and vaporizing thousands; sixteen square miles of the city were flattened and more than 100,000 men, women, and children were killed.

Black Snow is the story of this devastating operation. Author James M. Scott reconstructs in granular detail that horrific night. He also describes the development of the B-29 and how the raid represented a significant moral shift for America, marking the first time commanders deliberately targeted civilians, which paved the way for the atomic bombing of Hiroshima and Nagasaki five months later.