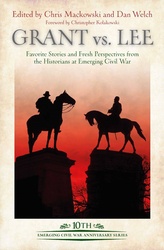 Grant Vs. Lee: Favorite Stories And Fresh Perspectives For The Historians At Emerging Civil War

Legendary tales of Grant and Lee

By the spring of 1864, Robert E. Lee embodied the Confederate cause. Ulysses S. Grant knew as much and decided to take the field with the Potomac army. Grant’s directive to General Meade was straightforward: “Where Lee goes, there you will go also.”

Lee and Grant would come to symbolize the armies they led when the spring 1864 campaign began in northern Virginia. What followed was a bloody death match that ran through the long siege of Richmond and Petersburg before finally ending at Appomattox Court House eleven months later.

Grant vs. Lee: Favorite Stories and Fresh Perspectives from the Historians at Emerging Civil War recounts some of the most famous episodes and compelling human dramas from the marquee matchup of the Civil War.