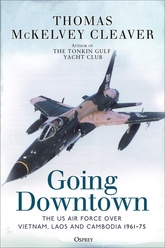 Going Downtown: The US Air Force Over Vietnam, Laos and Cambodia, 1961-75

The involvement of the US Air Force in the Southeast Asian Wars officially began in 1962 with crews sent to train Vietnamese pilots and finally ended in 1972 with the B-52 bombing of Hanoi. Although, there were Air Force pilots unofficially flying combat in Laos up until the end in 1975. The missions flown by USAF aircrews during those years in Southeast Asia differed widely, from attacking the Ho Chi Minh Trail at night with modified T-28 trainers to missions “Downtown,” the name aircrew gave Hanoi, the central target of the war.

Featuring a broad range of personal accounts and previously untold stories, this fascinating history brings together the full story of the US Air Force's struggle in the skies over Southeast Asia.