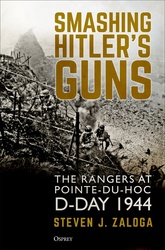 The Ranger attack on the German gun batteries at Pointe-du-Hoc is the stuff of legend. The gun batteries were strategically positioned between the two American D-Day landing beaches and were considered the main threat to the landings. On June 6, 1944, the Rangers succeeded in scaling the 100-foot cliffs, but the guns were nowhere to be found. Spreading out in all directions, a Ranger team managed to find and spike the guns at their hidden location.

This new book takes a fresh look at the entire attack on Pointe-du-Hoc, examining the creation of the German gun battery and the plans to assault the site. Plus, the Allied bombing attacks on Pointe-du-Hoc are detailed, as well as the subsequent intelligence investigations of the results.