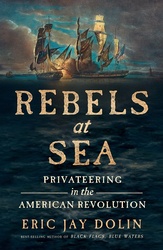 Rebels At Sea: Privateering In The American Revolution

Set sail with unsung heroes of the Revolution

The heroic story of the founding of the U.S. Navy during the Revolution has been told many times, yet largely missing from maritime histories is the ragtag fleet of private vessels that truly revealed the new nation’s character--above all, its ambition and entrepreneurial ethos.

In Rebels at Sea, historian Eric Jay Dolin corrects that significant omission, and contends that privateers were in fact critical to the American victory. As Dolin stirringly demonstrates, at a time when the young Continental Navy numbered no more than about sixty vessels, privateers rushed to fill the gaps. Nearly 2,000 set sail over the course of the war, with tens of thousands of Americans serving on them and capturing some 1,800 British ships.