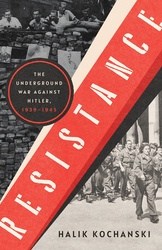 Resistance: The Underground War Against Hitler, 1939-1945

The courage to resist

In every country that fell to the Third Reich during the Second World War, a resistance movement against Nazi domination emerged. And every country that endured occupation created its own fiercely nationalist account of the role of homegrown resistance in its eventual liberation. Author Halik Kochanski’s panoramic, prodigiously researched work is a monumental achievement: the first book to strip these disparate national histories of myth and nostalgia and to integrate them into a definitive chronicle of the underground war against the Nazis.

A landmark history that will endure for decades to come, Resistance forces every reader to ask themselves a very important question: “What would I have done?”