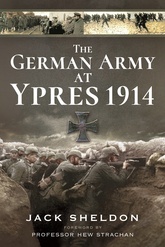 Deadlocked on the Western Front

Soon after WWI broke out in 1914, Allied and German forces attempted to outflank each other in a series of battles along the Western Front. Some of the most intense fighting came at the First Battle of Ypres, where both sides eventually became locked into positional warfare.

In this groundbreaking study of the First Battle of Ypres, historian Jack Sheldon presents a tactical narrative of German operations at the regimental and battalion level. Focusing on the battles around Ypres against the British Expeditionary Force, Sheldon also analyzes the fighting against the French and Belgian armies. Plus, this authoritative book features the first complete account of German army operations during the battles north of Lille in the fall of 1914.