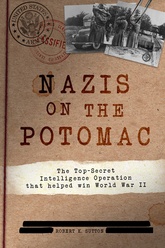 Shortly after the United States entered WWII, the US military established a secret facility which would interrogate high-level Nazi prisoners and analyze captured war documents.

This complex, established at Fort Hunt, was known by the code name: PO Box 1142. The American servicemen who interrogated German prisoners or translated captured documents were young, bright, and dedicated to their work. Many of them were Jews, who had escaped Nazi Germany as children. They never used corporal punishment in interrogations of German soldiers but developed and deployed dozens of tricks to gain critical information.

This is the first book to describe the intelligence operations at PO Box 1142 and celebrate the people who served there.