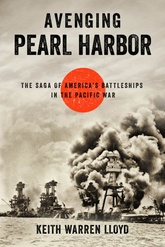 Avenging Pearl Harbor: The Saga Of America's Battleships In The Pacific War

From tragedy to triumph

On the night of October 24th, 1944, a force of two battleships, one heavy cruiser and four destroyers from the Imperial Japanese Navy steamed into Surigao Strait in the Philippines. Their objective: to attack the invasion fleet of General Douglas MacArthur’s army in Leyte Gulf. When the smoke cleared, the Japanese fleet had been all but annihilated. Among the victorious American battleships were the Maryland, Pennsylvania, West Virginia, California, and Tennessee, five of the eight dreadnoughts that had been bombed at Pearl Harbor.

Avenging Pearl Harbor takes readers from the attack on December 7th, detailing the severe damage dealt to each of the five ships, to the final drama of their triumph at the battle of Surigao Strait.