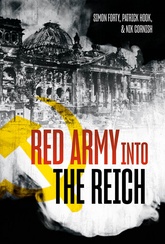 Red Army Into The Reich

The last year of the WWII saw Russian offensives that cleared the Germans out of their final strongholds in Finland and the Baltic states, before advancing into Finnmark in Norway and the east European states that bordered Germany. By spring of 1945, the Red Army thrust deep into Germany where they met American, French, and British troops advancing from the west. The final days of the Third Reich were at hand. Berlin was surrounded, attacked, and taken. Hitler’s suicide and his successors’ unconditional surrender ended the war.

Red Army into the Reich is a richly detailed examination of how the Russians pushed west and into Berlin. This immersive narrative history puts readers directly in the action with over 500 photographs and maps.