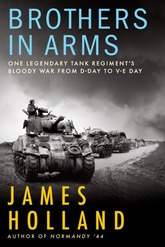 Making tracks with the Sherwood Rangers

In the annals of World War II, certain groups of soldiers stand out, and among the most notable were the Sherwood Rangers. After winning acclaim in the North African campaign, this extraordinary tank unit spearheaded one of the D-Day landings in Normandy on June 6, 1944, led the way across France, were the first British troops to cross into Germany, and contributed mightily to Germany’s surrender in May 1945.