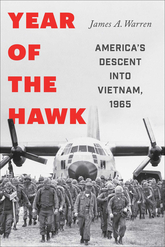 Year Of The Hawk: America's Descent Into Vietnam, 1965

by James A. Warren

A year that forever changed America

The Vietnam War was the greatest disaster in the history of American foreign policy. The conflict shook the nation to its foundations, and left the country baffled about its role in the world.

Year of the Hawk is a military and political history of the Vietnam War in 1965. Vividly interweaving events in the US with action in Southeast Asia, historian James A. Warren explores the mindsets and strategies of our adversaries. He also concludes that, in the end, Washington was not so much outfought in Vietnam as outthought by revolutionaries pursuing a brilliant protracted war strategy.

Based on new research, Year of the Hawk offers fresh insight into how a nationalist movement in a small country defeated the most powerful nation on earth.