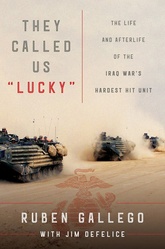 They Called Us "Lucky": The Life And Afterlife Of The Iraq War's Hardest Hit Unit

At first, they were “Lucky Lima.” Infantryman Ruben Gallego and his brothers in Lima Company—3rd Battalion, 25th Marines, young men drawn from blue-collar towns, immigrant households, Navajo reservations—returned unscathed from patrol after patrol. Then, in May 2005, Lima’s fortunes flipped. By the time 3/25 went home in November, it had lost more men than any other single unit in the Iraq War.

They Called Us “Lucky” details Gallego’s journey and includes harrowing accounts of some of the war’s most costly battles. It details the struggles and the successes of Gallego—now a member of Congress—and the rest of Lima Company following Iraq. And it serves as a tribute to Gallego’s fallen comrades, who made the ultimate sacrifice for their country.