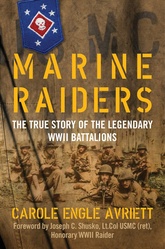 Marine Raiders: The True Story Of The Legendary WWII Battalions

At the beginning of WWII, military planners set out to form the most ruthless, skilled, and effective fighting force the world had ever seen. The U.S. Marines were already the world’s greatest combat soldiers, but leadership wanted a select group to conduct special operations at the highest level in the Pacific theater. And so the Marine Raiders were born. Marksmen, brawlers, and tacticians, they could accomplish their objective before the enemy even knew they were there.

These heroes and their exploits should be the stuff of legend. However, they have disappeared into the mists of history--until now. With this gripping and informative book, the Marine Raiders are finally given the attention and respect that they have always deserved.